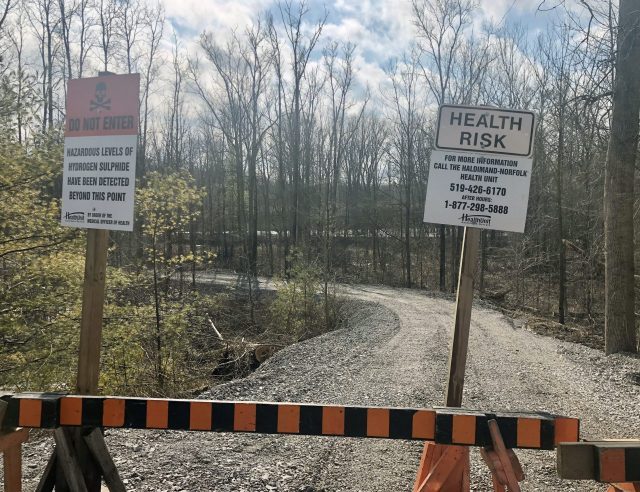 Initial attempts to remediate an abandoned gas well leaking hydrogen sulphide, located along Forestry Farm Road, have not been successful.

Crews have been working since March to drill and install a monitoring well – to collect information on the area’s hydrology – near the leaking, abandoned well, but the area’s overcharged aquifer is forcing groundwater to flow to the surface, hampering repeated efforts to drill the monitoring well.

The work was the first of a three-phase remediation plan developed by scientists from the University of Waterloo and engineering consultants Geofirma.

Phase two would have involved using the data to design a relief well to control the flow of water to the surface.

Phase three would have seen a water treatment plant designed to remove hydrogen sulphide from the groundwater discharge.

The project, partially funded by the Ministry of Natural Resources and Forestry (Norfolk is awaiting further Ministry funding), has been paused while the County and Ministry consider their options.

The area is being secured with permanent fencing for public safety.

Researchers from the University of Waterloo theorize that the well likely started leaking as a result of the plugging of another area well in 2015.

The plugging likely caused what the researchers are calling a “whack-a-mole” effect, in which underground pressure causes other wells – such as the one on Forestry Farm Road – to leak.

The protection of the health and safety of the public remains Norfolk County’s top priority, however little research into the effects of long-term exposure to hydrogen sulphide exists.

Hydrogen sulphide occurs naturally, in areas such as wetlands and sulfur springs. Exposure to low concentrations may irritate the eyes, nose and throat and cause headaches and other health issues. Please contact your medical provider if you are experiencing symptoms.