Description: One generation occurs annually.  Larvae feed on the leaves of host trees for 6-8 weeks over the spring and summer months.

What to Look For: Fall/Winter: buff coloured egg masses 1-4cm in length laid on tree trunks and branches. Spring/Summer: Hairy larvae with 5 pairs of blue dots and 6 pairs of red dots along their backs. Feeding damage ranges from small “shotgun” holes in leaves to consuming entire leaves.

Click here to learn more about the gypsy moth control for 2021.

Description: Tiny green beetle whose larvae feed under the bark, disrupting the flow of water and nutrients.  Can kill a healthy Ash tree in as little as 2 years.

Description: Large black beetle with white spots and distinctive long antennae. Larvae bore deep into a tree’s heartwood, where they feed on the tree’s nutrients. This tunneling damages and eventually kills the tree.

What to Look For: Oval to round pits in the bark caused by females for egg laying sites.  Circular exit holes 6-14 mm in diameter. Visible frass in cracks in the bark.

Description: Found in the lower limbs and trunk of hosts. Usually found in trees that have been predisposed to other stressors.

What to Look For: “S”-shaped galleries under bark. “D”-shaped exit holes. Similar to the Emerald Ash Borer. There are 3 known colour variations of the adult beetle: green, blue and gold.

Description: Adult wasps are large, ranging from 5-7cm in length. Females are attracted to stressed trees for egg laying.

What to Look For: Crowns turn light green, needles may wilt and turn yellow to reddish brown. Resin beading on trunk from oviposition. Round exit holes 3-8mm in diameter.

What to Look For: Symptoms may include: thinning crown, wilted leaves, dead twigs and limbs, epicormic shoots, and tiny borer holes 3mm in diameter.

Description: This beetle can kill a tree in 2 years. First it attacks the shoots, weakening the tree, and then breeds in the main stem.

What to Look For: Wilted, yellowing or fallen shoots. Pin head sized exit holes. Adult beetles inside the shoots and shoots with resin encrusted borer holes.

Description: Fungal infection that initially affects the tree through buds, leaf scars or insect wounds. Spores from the cankers are washed by rain down the main stem, spreading the infection.

What to Look For: Elongated, sunken cankers found on the bark. In the summer, an inky black fluid exudes from cracks in the canker. Affects trees of all ages.

Description: The disease is a result of an interaction between an insect and a fungus. Occurs when a tree is infested with a scale insect. The fungus infects the tree through the feeding wounds left from the insect.

What to Look For: Beech scale: scattered woolly spots on the tree trunk.  Fungal infection: causes a reddish-brown liquid to ooze out from the wounds in the bark (“tarry spots”). Cankers develop on the bark, giving it a roughened appearance.

Description: Fungal disease that kills dogwoods of all sizes, most severe on young seedlings and understory forest trees. Infections are most likely to occur during cool, wet weather in spring and fall. Drought and winter injury appear to increase risk for infection.

What to Look For: Tan coloured leaf spots, with a purple border. Leaves may also have necrotic veins and leaf margins, and large necrotic blotches. Brown elliptical cankers may develop on twigs and branches.

Description: Fungal spores invade trees at breaks or wounds in the bark causing cankers to form. The cankers girdle the tree cutting off water and nutrients, resulting in tree mortality. This blight has wiped out the majority of Chestnut trees in Norfolk, though a few remain today.

What to Look For: Cankers on bark that looks like reddish-brown blisters. Bark cracks, leaf withering and orange pustules found in the canker areas are also common symptoms.

Description: This disease was introduced into Canada around 1940 and has since wiped out many of the majestic old elms found along roadsides and in woodlots. This disease is spread by the Elm Bark Beetle, which carries the fungus from infected trees to healthy trees as they feed.

What to Look For: Leaves of affected branches wilt, curl up and dry out, while turning yellowish or brownish, but they usually remain on the tree. Exposed wood beneath the bark will have numerous brown streaks. 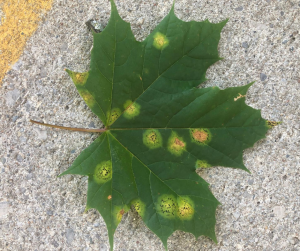 Tar spots generally begin as light green and yellow blotches on the leaves of the tree. They begin to get darker by late summer, and tiny dark spots begin to appear. Eventually, the leaf is full of dark spots that can be 0.5 cm to 2.5 cm in diameter.

Tar spot is a fungal disease that commonly affects maple and sycamore trees and usually appears in the fall. They tend to be more prominent on Norway Maple, Silver Maple and Red Maple.

Tar spot is mostly a cosmetic issue, and does not cause any significant damage to the tree. In some cases, tar spot may cause the host tree to drop some leaves early. Because this tends to happen later in the summer, the early loss of some leaves does not harm the tree.

The best course of action in dealing with tar spot is to rake and destroy leaves when they fall from the tree. Because tar spot is caused by a fungal disease, the spores of tar spot are the main mechanism in which it spreads.

The spores can survive the winter and are spread to new leaves as they emerge in the spring. By raking leaves in the fall and destroying them, or removing them from the property, the amount of spores present in the area is greatly reduced.