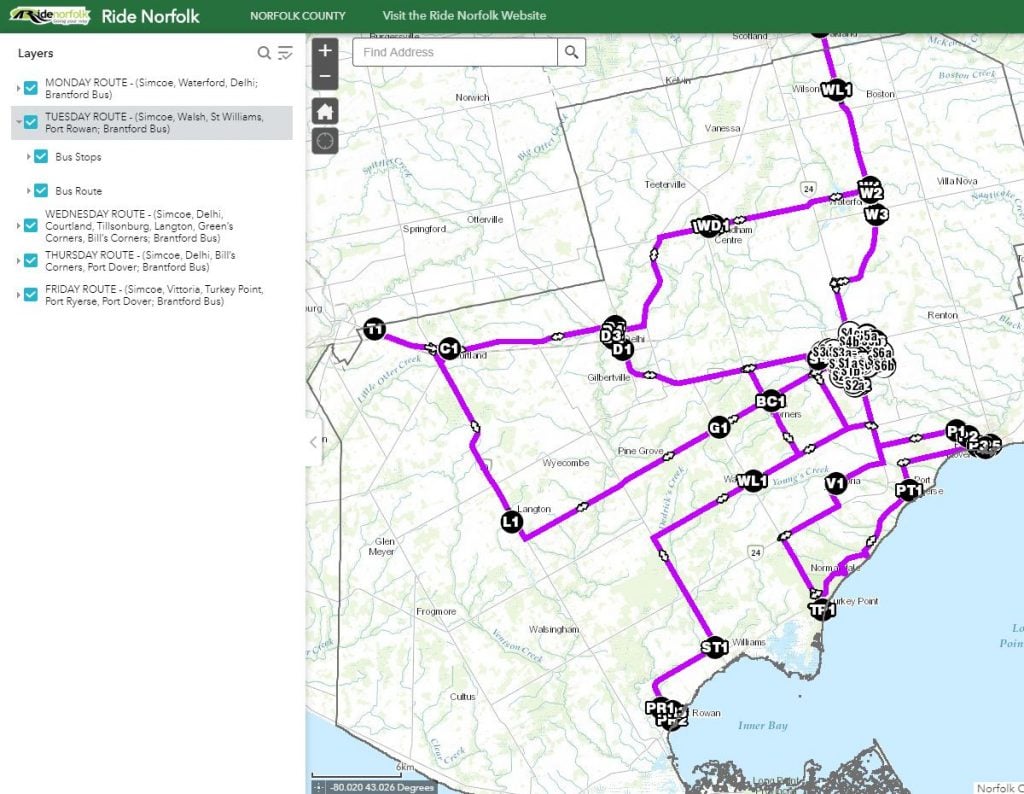 Norfolk County recently uploaded an app (norfolkcounty.ca/visiting/norfolk-maps/online-interactive-maps/) that provides options to see which routes and stops are provided on specific days, including the newly installed route to Brantford.

“The map lends itself to riders being able to get a clear snapshot of the daily route Ride Norfolk takes,” said Norfolk’s Public Transportation and Business Development Coordinator Blaire Sylvester. “Overall it will help users get where they need to go by showing specific stop locations and connection times for seamless transfers.”

Ride Norfolk provides low-cost public transit to locations throughout the county and beyond. Stops are located in Simcoe, Delhi, Courtland, Tillsonburg, Vittoria, Bill’s Corners, Waterford, St. Williams, and others.

Earlier this year, a Brantford bus route that operates three times per day Monday to Friday was introduced thanks to a successful approval of funds through the provincial government’s Community Transportation Grant. Along the way, it stops in Waterford, Wilsonville, Oakland, and Mount Pleasant en route to the city’s downtown bus terminal. The schedule allows for easy transfers with Brantford’s GO Bus service.

“We’ve seen a pretty substantial increase in ridership since we launched in May,” Sylvester said of the Brantford route, which now sees an average of 150 users per month. “We didn’t quite know what to expect when it started but being just over four months in, the ridership growth has shown us this service is needed in our community.”

Also this year, Ride Norfolk increased local service by adding a handful of new stops. They include the Delhi Medical Centre, Delhi Friendship Centre, Waterford Medical Centre, and Harbour St. in Port Dover as well as service in Windham Centre.

A full list of stops, printable schedules and link to purchase advanced tickets can be found at norfolkcounty.ca/transit/.