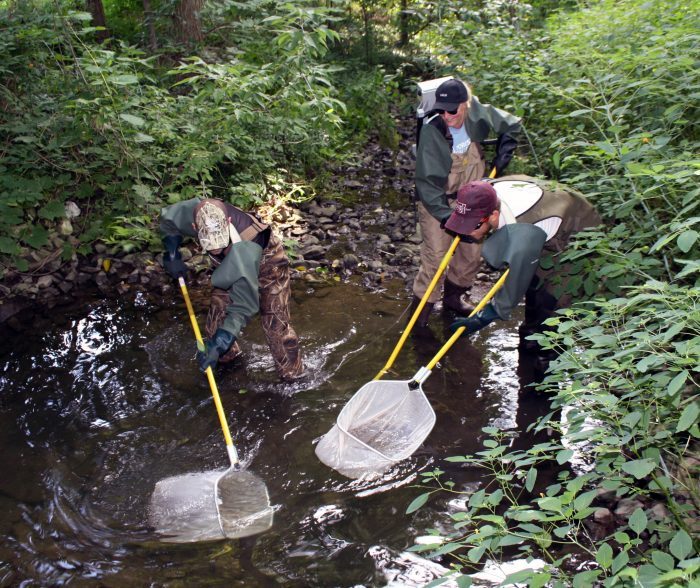 Aug 21 – Norfolk County’s next generation of environmental stewards have gotten some real-world – and very valuable – experiences this summer.

A team from Norfolk County’s public works and NEST (Norfolk Environmental Stewardship Team) program joined forces with Paul Gagnon, lands and water supervisor with the Long Point Region Conservation Authority (LPRCA) to do some important research in Simcoe Aug. 16. A crew of seven inspected, researched and re-classified a storm drain at the corner of Highway 24 South and Evergreen Hill Road in Simcoe.

With the Department of Fisheries and Oceans requiring classifications to drains, the crew has been doing so across Norfolk. At the same time, they’ve taken part in a brook trout study being compiled by the Ministry of Natural Resources and Forestry, Norfolk County and LPRCA.

“Water quality is very expensive to sample,” Gagnon noted. “We have a partnership with the Ministry of Environment to sample ten sites in the watershed but that’s a very small portion of our watercourses. Brook trout are canaries of the watercourse – they need cold, pristine systems.”

“If we can get brook trout re-established in these systems, we don’t have to do water quality sampling, we just monitor those brook trout,” he added. 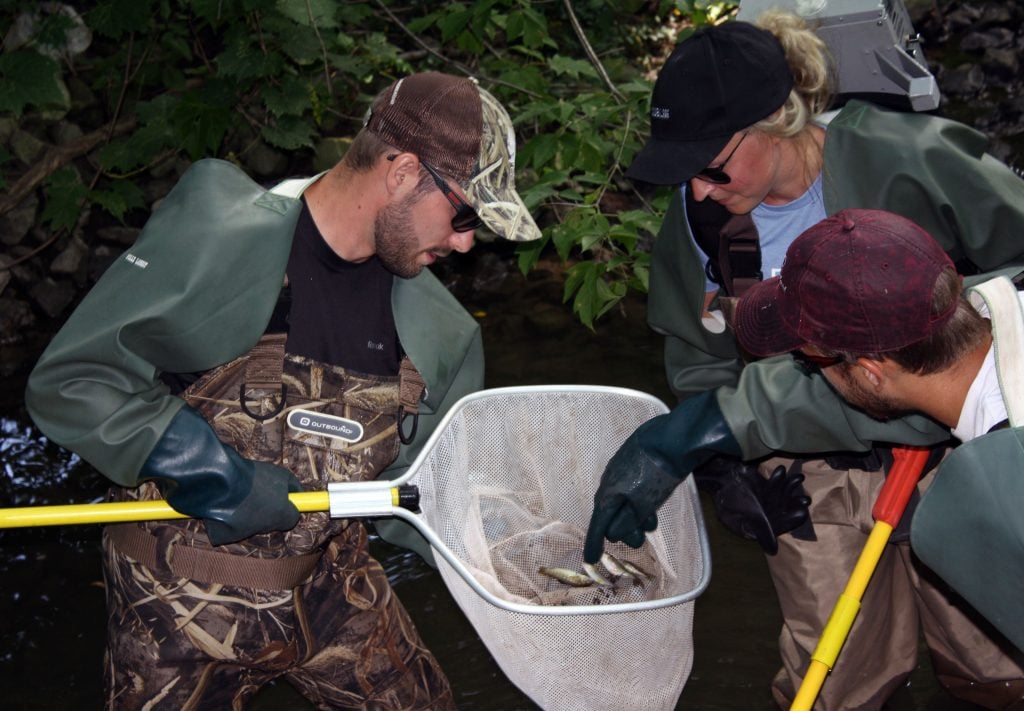 The good news for all involved was that brown trout (another sensitive species), along with several other species, were present in a small pocket of water that runs in a shallow stream to the Lynn River.

“That tells us that one, the stormceptors that take out grit and stuff from parking lots, they’re working because the water quality is good,” said Gagnon. “We’re getting a cold base flow and the trout are using this stormwater drain as nursery habitat. You get a couple rains in October/November and they’ll flush down into the system and be a little bit bigger and stronger to avoid predators.”

In the water netting fish was NEST members Caleb Girard and Joseph Auger, while Norfolk Drainage Program Coordinator Morgan Van Laeken worked the “electroshocker”, a device that temporarily stuns fish so they can be recorded, studied and quickly released.

“When we started on this site, we didn’t have any expectations to find fish, so it was a really positive thing that we found them because now we can show we’re doing the proper things to make sure areas like this have diversity and habitat as well as functioning as a drain,” said Van Laeken. 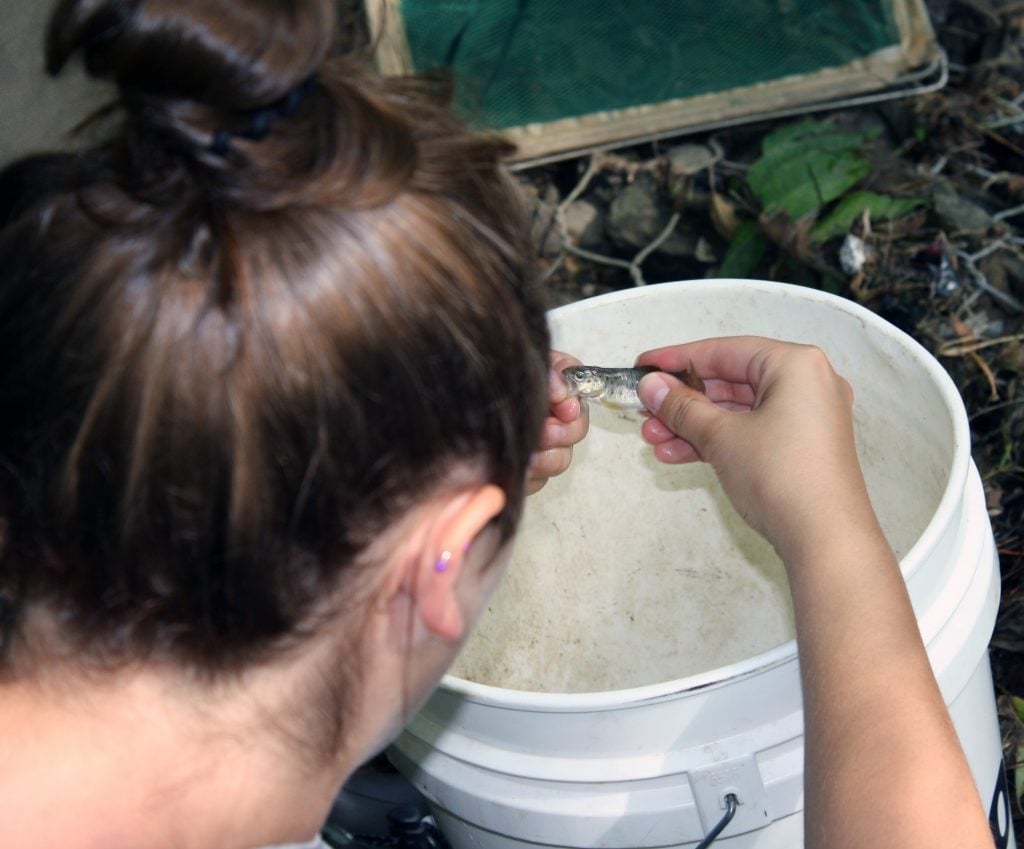 Now a full-time employee of the county, Van Laeken started her career as a student on the NEST crew assisting with similar studies.

“I was new to the environmental field and this was how I got exposure,” she noted. “It’s nice to see a new group of people getting the experience that may help them obtain a full-time job in their field within Norfolk County.”

“That is what the NEST program was formed to do,” Van Laeken added. “That and make connections with local environmental organizations such as the LPRCA that they otherwise wouldn’t have.”

Van Laeken said being able to classify drains and be part of a brook trout study wouldn’t be possible without partnering alongside Gagnon and the LPRCA.

“Paul has the knowledge base to link between what’s going on in the drain and the habitat aspect of it,” she said. 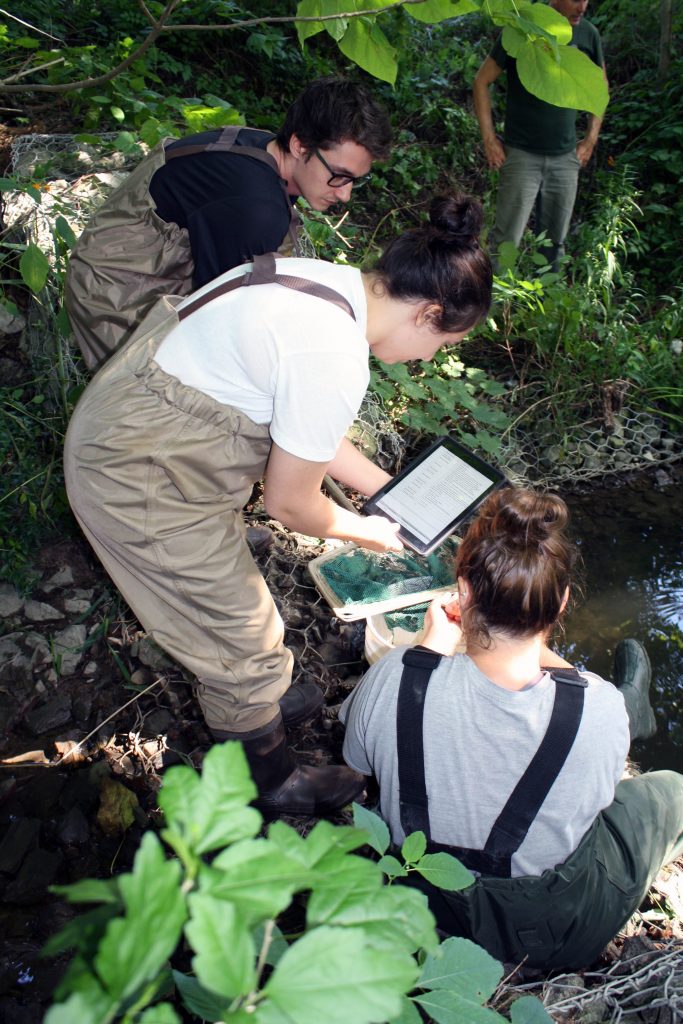 An 18-year member of LPRCA, Gagnon is happy to share his expertise with youngsters looking to work in the field.

“This project in particular is an important one because there’s so many drains in Norfolk County that provide baseflow and nursery habitat to the downstream watercourses,” he said. “These watercourses provide both an important fishery in Norfolk County and also support the recreational fishery and tourism in the Long Point Bay and Lake Erie. If we can make sure that the larval habitat and the recruitment of the fishery and the water quality is really good in our systems, we’re going to support everything down the line.” 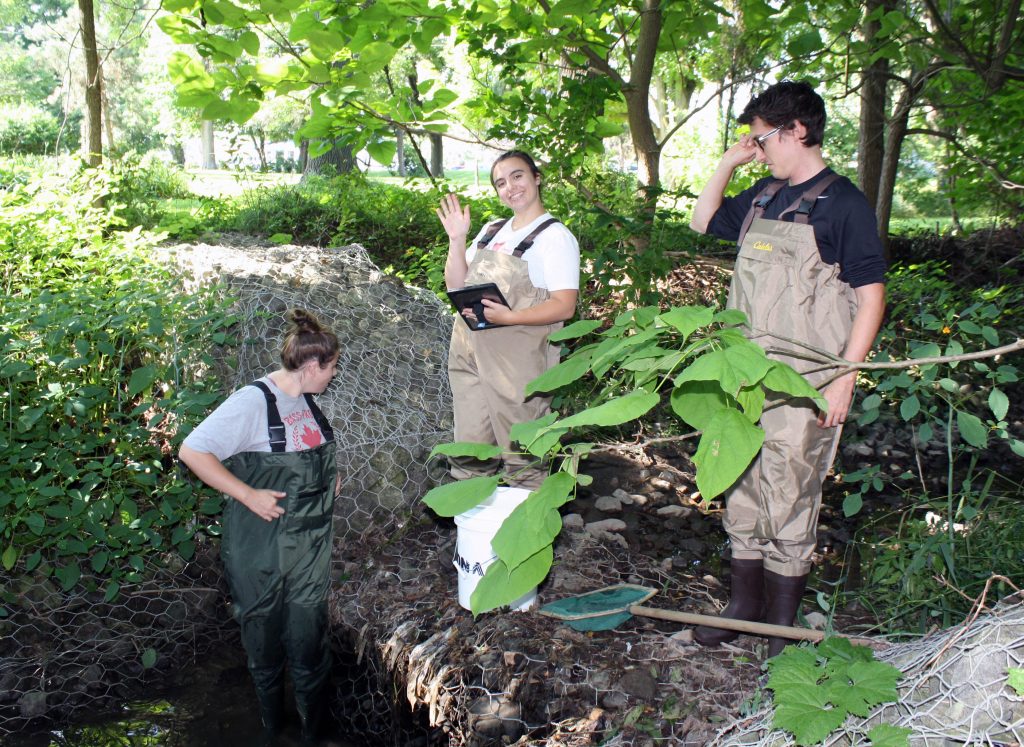