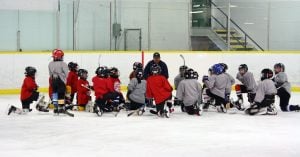 Created by Delhi NHLers Ryan VandenBussche and Geordie Kinnear, the week-long camp quickly became a haven for youngsters yearning for more ice-time during the summer.

After a successful Ontario Hockey League career, Horvat is now an American Hockey League (AHL) veteran and, alongside Kinnear, one of the camp’s main instructors.

“Geordie and Ryan could’ve easily just taken their summers off and do whatever they wanted, but they came back home and put their time in,” Horvat recalled. “It’s a long week for them and a great week for the kids. To look up to them and eventually play pro and be able to come back and give back to the community like they did is just an awesome experience.”

Tri-County Pros is celebrating its 20th anniversary by hosting over 40 skaters from the ages of 7-13 this week at the Simcoe Recreation Centre.

A few of the coaches and helpers have changed over the years, but the principles the school was built on remain the same.

“The game is about having fun, passion, discipline and a work ethic,” said Kinnear, head coach of the AHL Springfield Thunderbirds. “You fall down and you know you get back up and you’re going to be alright, that’s life in general. I think it’s developing their passion to play and get better.”

Kinnear feels grateful to have been surrounded by coaches such as Horvat and junior/university players through the years like Adam Brady and the trio of Marc, Justin, and Michael Stevens.

“When the kids see how hard they work, that’s what wins in the end – when you have a good work ethic and a lot of grit,” Kinnear added.

This week the coaching roster added Delhi native Landon McCallum. After posting 17 goals and 32 assists in 31 games for the minor midget Brantford 99ers, McCallum was taken 15th overall in this year’s Ontario Hockey League draft by the Sudbury Wolves. Recently, the Holy Trinity student received an invite to the Under-17 Hockey Canada Development Camp in Calgary.

“That’s awesome because you work with those guys when they’re young and you want to see them succeed,” Horvat said of McCallum’s success. “Not all these kids (at camp) are going to continue playing hockey but you might have half of them that do and to work with them, they come up and hopefully you can kind of pass the torch on to them.” 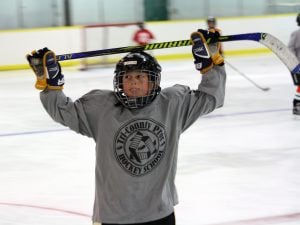 Coming off a season with the Springfield Thunderbirds, Horvat – who won the AHL title with Manchester in 2015 – enjoys seeing young players refine their skills throughout the week.

“It might be stickhandling on their backhand or getting low on that stride, maybe getting a little faster, if there’s one thing they can get better at – it doesn’t have to be everything each day – but if they can improve each day and I can see that they’re happy with it, that makes it worth it to me,” he said. 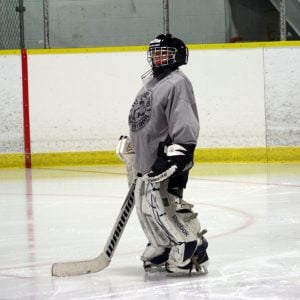