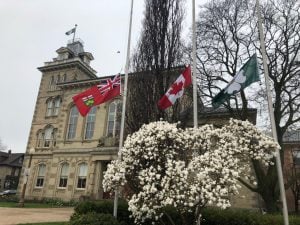 May 3, 2019, Simcoe, ON – Residents of Norfolk County are mourning the loss of Leonard “Red” Kelly today.

“Mr. Kelly was best known for what he did on the ice, but he was much more than a Stanley Cup Champion and Hockey Hall of Famer,” says Norfolk County’s Deputy Mayor Amy Martin. “He was a devoted husband, father and grandfather, a community leader, and a terrific ambassador for all of Norfolk County. He was a true gentleman who did everything with honour. I think I speak for everyone in Norfolk when I say he will be sorely missed.”

Norfolk County has lowered the flags at Governor Simcoe Square to half-staff in honour of Mr. Kelly.